PCR is a common technique used to amplify specific regions of DNA. Put more simply, its a process that allows us to create copies of a piece of DNA. There are two main properties of PCR that we take advantage of - amplification (getting many copies) and isolation (of a single region).

If you understand the basic idea of photocopying, then you can understand PCR. 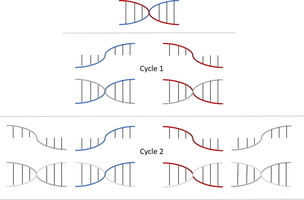 I should note that the role of PCR has changed over time and I will mostly be focusing on the current use. Additionally, there are several variants based off the standard PCR, including rt/qPCR, but those will be covered in a different post.

Typically PCR is just a step to let us do something else with a gene or region of DNA. It is the first step in gene cloning or for things like gene editing. It can also be used ‘genotype’ an individual for a gene, i.e. figure out which specific copy of a gene someone has.

How does PCR work conceptually?

PCR is basically just a photocopy with zoom feature. In both cases, you have to start with an ‘original’ copy, which we call a template. However, the cellular machinery that does the copying doesn’t know how to get started making the copy with a blank page. So we give it the equivalent of a dot of ink at the start of a line, called a primer, that lets the copy get started.

Because we provide the primers, we need to know at least some sequence around whatever is being PCR’ed.