The goal of gene cloning is to get a single copy of the gene from an animal and into an archive. The rest is just the individual steps necessary to do this. Cloning genes allows us to easily and consistently retrieve the exact same copy and to share it between labs or even organisms.

What is a vector and what how is it used?

A vector is a small, self contained piece of DNA that can be added to an organism, typically bacteria. It is how we archive the gene we are cloning.

Usually, the vector contains genes within it that give the bacteria new traits, such as antibiotic resistance. You can then select bacteria with these traits to check that the vector is present. Note that the vector may contain multiple genes, some of which may be entirely foreign to the organism. For instance it is possible to ‘archive’ a mouse gene in E. coli.

Bacteria are usually our ‘container’ of choice for several reasons. They grow quickly allowing you to get many copies of your archived gene. Perhaps more importantly, it is very easy to insert the vector. Bacteria naturally take up pieces of DNA called plasmids and incorporate them into their genetic material.

An example of selecting for bacteria that have a vector. In this case, the trait that the vector added also includes blue coloration. 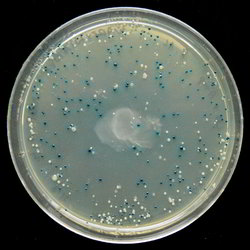 Ok. So what is a plasmid?

Well, in many cases, the vector is a plasmid. In this case, the plasmid is a round piece of DNA that is separate from the main genetic material. Importantly a plasmid loose in the environment can be added to an existing bacteria aka incorporated. Additionally, it copied independently of the main genetic material and at the control of the scientist, which is necessary for some applications.

Other explanations or learning material: