Understanding or measuring how animals think is difficult when they can’t talk to you. You can’t ask ‘what are you feeling?‘ much less, ‘why do you feel that way?‘, but it is still important to understand. For instance, we study drugs to all kinds of psychological issues (depression, alzheimer’s, Parkinson’s disease, etc) in rodents like mice and rats. Therefore, biologists have developed behavioral tests that inform us about what the animal is thinking or feeling.

The open field test measures general activity level and exploration behaviors. This lets us get a feel for how the animal behaves normally and is frequently used as a control in an experiment. In addition, numerous factors can influence how much an animal moves so by controlling what changes between tests, we can begin to understand how what we are testing influences the animal’s thinking.

Movement through a space is not random. Think about a public space like a mall or train station. While there are many people there, their actions aren’t random. You can start to tell something about the people by how they are moving. A person walking quickly from the moment they enter is probably in hurry to get to their destination - they are motivated. A person wandering around may be waiting for something (a friend, their ride, etc). They may be interested what is going on around them - browsing a store, looking at other people, etc - or perhaps they are reading a book or checking their phone - i.e. paying attention to something that is more interesting than what is going on around them.

We use similar logic when observing animals over an extended time1 in the Open Field Test. By measuring when and how an animal moves or doesn’t move around an enclosed area, we can start to make deductions on what is motivating the animal, which, in turn, can indicate what it might be feeling. For instance, a sudden stop and cowering can indicate fear or anxiety, while general movement and investigation of the area can indicate relaxed curiosity.

Automated tracking, even in 3 dimensions, is giving us more information than ever.

Historically, the ‘field’ would be divided into smaller regions with lines. The observer would then note time of line crossing as well as which areas the animal spent time in. Modern advances in video tracking are being used to automate tracking an animal giving us more data than ever. This is simpler when handling something like a mouse is a large box, but it is possible to do 3D tracking of a bird’s position in a room.

Variants of the open field Assay

This kind of test isn’t just limited to mammals or terrestrial animals - we use the ‘open pool’ test for fish. The size of the pool can vary, but for sticklebacks we use a kiddie pool. For instance, in stickleback fish, we also measure a behavior called ‘freezing’, where the fish suddenly stops moving. Freezing occurs in the wild when a fish is in danger, such as when a predator is nearby and so is used as a marker of fear. By putting this information together, we can develop a better understanding of what is or isn’t motivating the animal. 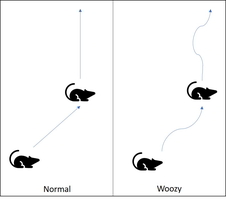 Alternatively, we can look for a change in an animal’s behavior due to a treatment such as receiving a drug, change in gene expression or social environment, or altering its access to food. For example, a drug that causes wooziness can reduce the amount of time spent walking in a straight line. Being hungry because it got less food might increase the speed the animal begins to explore new areas.

Optogenetics is allow us to see the immediate behavioral effects of changes in gene expression.

Most animal freeze when confronted with a new or scary object. Thus, we can put a new object in the field after the animal has had time to explore it and measure how frequently and for how long freezing occurs.

Venturing into new areas without hesitation is unusual as it can get you injured or killed. Thus we consider animals who do this to be ‘bold’ (thanks Star Trek).

This can be caused by a number of factors including things like hyperactivity or higher metabolism rate. However, in the case of increased activity, careful attention is paid to the use of space. Is the animal constantly revisiting areas they explored or are they uniformly visiting everywhere? Mice typically hug the wall area, so uniform usage may indicate a lack of caution.

Attention to a change = curiosity

Novel object exploration, i.e. spending time looking at or near a new item is called neophilia. In most cases, animals (and people!) prefer to explore something new. This can be used to test if an animal recognizes an object or animal that they have seen before.