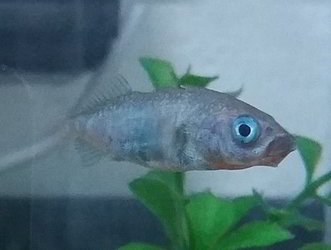 Meet your typical stickleback dad. My research is based on understanding how genes contribute to his behavior.

You can tell this is a male ready to become a dad because of his blue color and the red-orange color under his throat. Its only during the summer breeding season that he will look like this. Not all males will color up this brightly as it depends on a number of factors including the amount of light and the surrounding environment (gravel color).

There are a number of different answers to this question. I study sticklebacks because their behaviors have already been carefully studied before. In fact Nikolaas Tinbergen won the 1973 Nobel Prize in Medicine for his work on studying stickleback behaviors. This gives me a solid baseline from which I can look for differences in behavior based on how I manipulate the fish’s genes.

Most of my lab mates use stickleback fish because dads are the sole parent, building the nest and then providing care for the eggs and babies (called fry). This lets us see how Dads can influence their offspring. Most studies in mammals (mice, rats, and people) focus on Mom’s effects because young can’t be separated prior to birth (pre-natally). However, since fish lay eggs, we don’t have this limitation. Normally, stickleback fish use algae and sand to build nests. 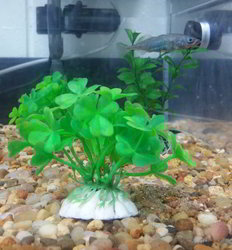 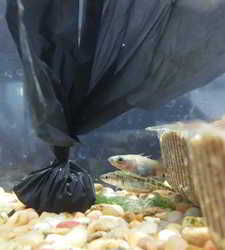 This particular male has improvised a nest out of small pebbles in his tank that you can see to the right of the plant. Even though he wasn’t given any material to build a nest, he still diligently gathered all the small gravel in the tank to build a nest. This poor guy doesn’t know he won’t get a chance to see a female as he is in a post-experimental tank of only males, but I was very touched by his work ethic. 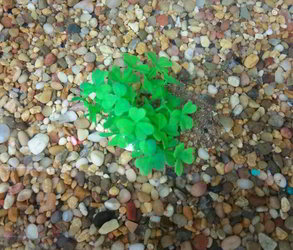 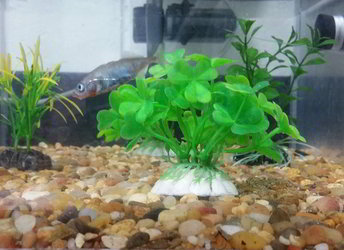 Finally, a major reason that sticklebacks are used in research is that there are many independent populations. Fresh water sticklebacks have evolved multiple times from their marine ancestors, who are also around. Since evolution takes so long, you can’t design experiments that include replication - repeated numerous times to make sure that your observations represent how things typically occur. However, nature has already done the replication for us with sticklebacks. In addition, since new populations are still being formed, we can look as different stages in the evolutionary process. HHMI has a great introductory video as well as a virtual lab on how stickleback are used to teach us about evolution.

So if there are many populations, are they all the same? If not which ones do you use?

They are not all the same, though many are very similar. In most cases, fresh water sticklebacks have less boney armor and shorter spines than their marine ancestors. While most populations have parental care, a few populations don’t provide care after fertilizing the eggs. Some populations live at the bottom or edges of lakes and streams (called benthic), while others live in the open water (called limnetic).

My research has been on a ‘typical’ population from Putah Creek in California. They are benthic, living on the edge or bottom of the creek, and face a moderate range of predictors.

What do you mean by stickleback behavior?

Some people find it hard to believe, but all animals have ‘normal’ behaviors. They can be more or less complex - such as a your goldfish coming to the water surface when you drop stuff (like food) into its tank or a dog shaking on command. Sometimes the behaviors are natural like eating or avoiding being eaten or trained like when a dog obeys your command.

Natural stickleback behaviors include things like building a nest, courting females, defending their territories, and providing care to their young. To defend their nests, stickleback dad’s attack (bite and chase) any intruders, both other male sticklebacks and predators. This is how I measure aggression.

Here the resident (loose) stickleback attacks the intruder who is in the flask until it moves away. This is taken from an actual aggression test (we call it a flask assay) done as part of my research. 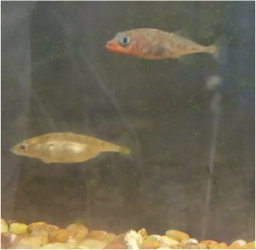